On the first day of sightseeing, we decided to ride the ferry out to Liberty Island and Ellis Island.  As a history buff, I was most excited about Ellis Island.  The problem was, there were a lot of other people who had the same idea.  The line to get tickets was long, but after buying tickets the wait to just get on a boat was still another two hours.  To top it off, NYC was experiencing unseasonably warm weather, and waiting outside in the hot sun wasn’t the way we wanted to spend our time.  So we bought tickets for another day, and rode the Staten Island Ferry instead. 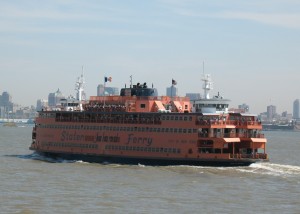 From there we walked up through the financial district, past Wall Street and the New York Stock Exchange.  My editor, Lisa Sandell, met us at Trinity Church, a beautiful cathedral where we heard a youth choir sing for a few minutes.  It was really wonderful to meet Lisa for the first time.  She walked with us to Ground Zero, which was a haunting experience.  There is a profound absence there, and it’s not just the physical opening left behind in the density of the city.  There is a psychological void there, waiting to be filled.  I hope the city will soon resolve the issues and conflicts around the building of a memorial. 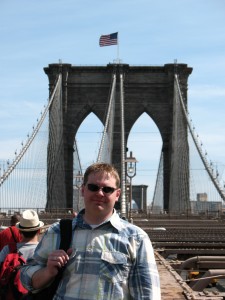 After that, we walked to the Brooklyn Bridge.  A few years ago, I watched a documentary about the building of the bridge, and ever since I’ve been fascinated by the ingenuity, the bravery, and the will it took to construct it, a truly monumental feat.  So to stand beneath its grand arches, to look down at the water below, was an inspiring experience.  I can only imagine what it would have been like to cross that bridge upon its opening, at the time the largest suspension bridge in the world.  Okay, I think I might be verging on becoming a documentary myself here, so I’ll move on.

After that, we walke

d up through Chinatown and Little Italy, and then rode the subway up to Grand Central Station.  From there we went to the New York Public Library.  The Children’s Room there has Winnie the Pooh on display.  Like, the actual Winnie the Pooh.  And Tigger, and Kanga, and Piglet.  Even Eeyore.  The library has the original stuffed animals that A. A. Milne gave to his son, Christopher Robin.  The same toys that later inspired one of the most beloved characters in children’s literature.  They look a little threadbare and tattered (it actually appears as though Kanga might have been decapitated and had her head reattached at some point) but that only adds to their significance and charm.

That night, we went out to dinner at The Spice Market with Lisa and her husband, Liel.  It was a wonderful evening full of great food and great company, with plenty of fascinating and entertaining conversation.  If you ever meet either of them, you must ask them about the time they shared a train with smugglers on the Trans-Siberian Railroad.  I’d try to tell you the story myself, but I know I wouldn’t do it justice.