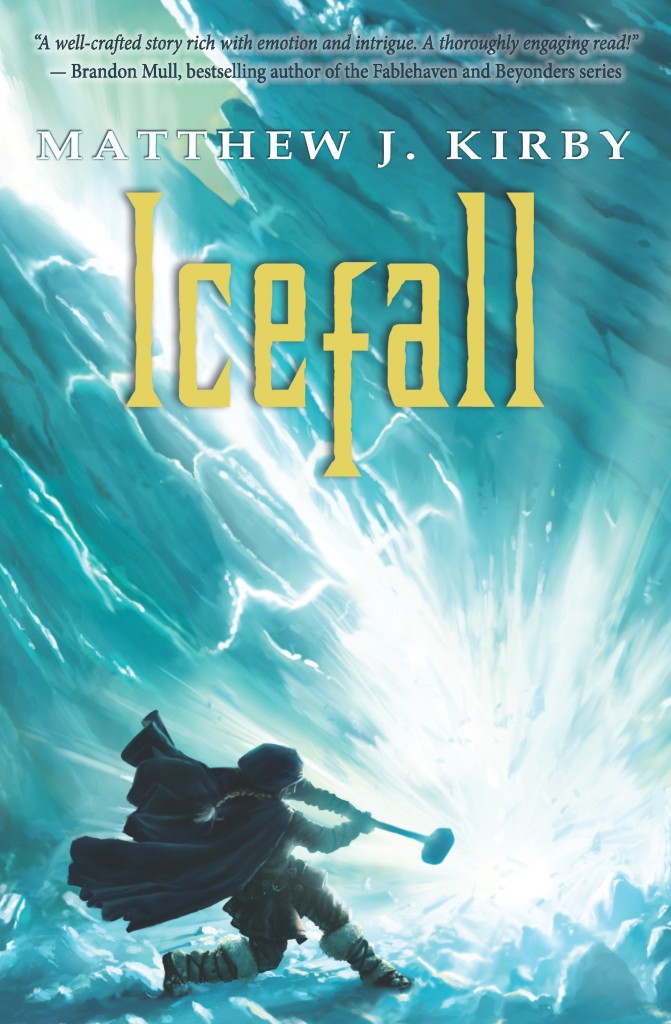 “Clear, lively, exciting, and unstoppable as the torrent of meltwater from a glacier, Icefall confirms Matthew Kirby as one of our finest new writers for young adults. Readers of any age may be enthralled by the bitter Nordic winter setting and the story of a girl who needs a lot of courage to discover who she is.” — Ursula K. Le Guin, acclaimed author of the Earthsea Cycle

“Against an authentic backdrop of ancient Norse life and lore, Kirby brings alive characters who are true to their time and culture. . . . I liked the brooding atmosphere of the natural world in this book. It is a beautiful place and beautifully described, but it is indifferent to the fate of the people caught in its grip.” — Nancy Farmer, Newbery Award-winning author of Sea of Trolls

“The chilly, claustrophobic, ancient setting is vividly created, and the sense of impending doom generates a gripping suspense overarching the developing—and deteriorating—relationships among the group, marking Kirby (The Clockwork Three, 2010) as a strong emerging novelist. Recommend this one to teens who crave a good mystery set in an icily different time and place.” — Kirkus

“Kirby turns in a claustrophobic, thought-provoking coming-of-age adventure that shows a young woman growing into her own, while demonstrating the power of myth and legend. Kirby’s attention to detail and stark descriptions make this an effective mood piece. Readers may be drawn in by the promise of action, which Kirby certainly fulfills, but they’ll be left contemplating the power of the pen versus the sword—or rather the story versus the war hammer.” — Publishers Weekly

“In a page-turning climax… the ensuing battle and survival scenes are vividly portrayed, and characters fight back with the epic heroism of gods. Solveig is an empathetic heroine and Hake, the hulky berserker war chief, is also a well-developed and (eventually) endearing character. Fans of John Flanagan’s “Ranger’s Apprentice” series (Philomel) will enjoy this adventure tale.” — School Library Journal

“Over the course of the brutal winter, Solveig learns the delicate art of storytelling from her father’s skald (“the poet of the living past”) and also forms a bond of mutual affection with the most fearsome berserker of the bunch. Her stories provide comfort, distraction, and hope for the starving people, but are tested to the utmost when blood begins to spill. Both elegant and exciting, this work recalls Jonathan Stroud’s Heroes of the Valley (2009) in its treatment of the lofty spot that lore occupies in a warrior society and how stories give meaning to both life and death.”  — Booklist

“Kirby masterfully interweaves the familiar aspects of Solveig’s coming of age with a taut, compelling mystery and survival story that fans of both fantasy and historical fiction will find utterly appealing. . . There’s an arctic bite that permeates even the most mundane of scenes, making the ominous setting a character in its own right, while the inclusion of several Nordic myths complete the icy picture. Readers will be left thinking about this one long after the chill has left their bones.” — Bulletin of the Center for Children’s Books

Trapped in a hidden fortress tucked between towering mountains and a frozen sea, Solveig, along with her brother the crown prince, their older sister, and an army of restless warriors, anxiously awaits news of her father’s victory at battle. But as winter stretches on, and the unending ice refuses to break, terrible acts of treachery soon make it clear that a traitor lurks in their midst. A malevolent air begins to seep through the fortress walls, and a smothering claustrophobia slowly turns these prisoners of winter against one another.

Those charged with protecting the king’s children are all suspect, and the siblings must choose their allies wisely. But who can be trusted so far from their father’s watchful eye and unchallenged authority? Can Solveig and her siblings survive the long winter months and expose the traitor before he succeeds in destroying a king, his empire, and his children?