PEN Center USA Award, and the first snowfall of the year 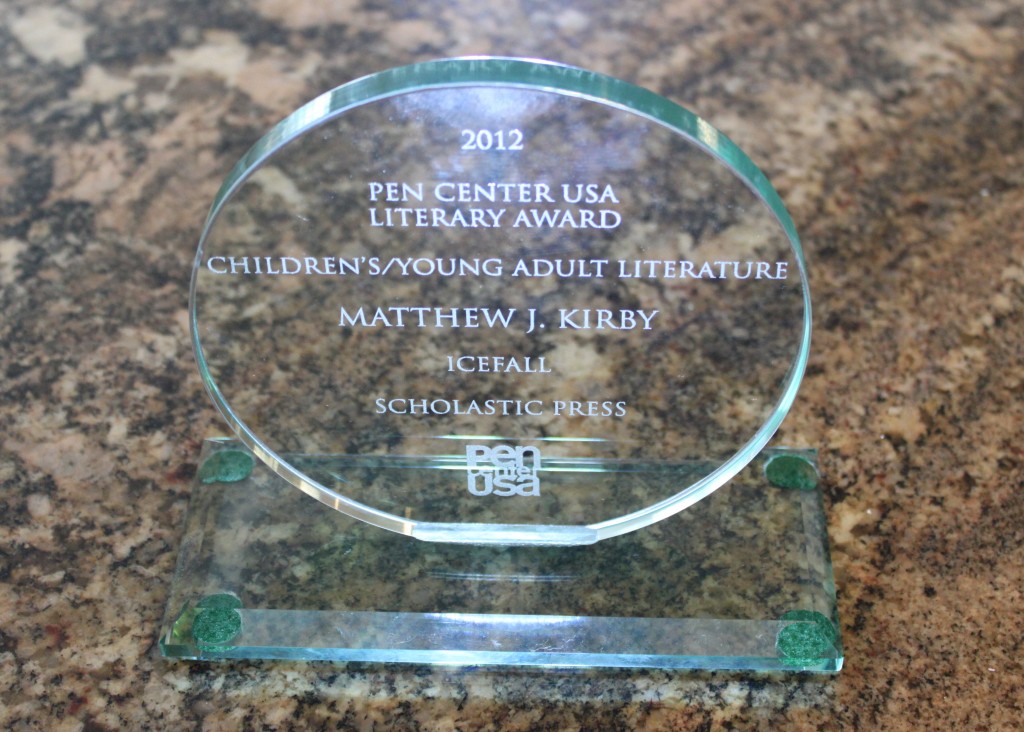 A few weeks ago, Scholastic was kind enough to send me to Los Angeles to receive the PEN Center USA Award for Icefall. I have to say, I think this was one of the most intimidating events I’ve been to. It’s partly because I was there alone and didn’t know anyone. It’s partly because it was held in Beverly Hills, and I’d spent that afternoon walking past stores I didn’t think I could even afford to set foot in. The banquet and ceremony were held in a ballroom at the Beverly Hills Hotel, and there was a cocktail reception before the event, during which I was just sort of hanging out on my own at the edges, watching the people and simply enjoying being there.

At one point, while I was texting my editor, I looked up and saw someone standing right in front of me who seemed familiar. She had red hair, and it took about five seconds for me to think to myself, “That’s Molly Ringwald.” And before I could decide if it was a good idea to say anything to her, she looked at me and smiled, and I smiled back and blurted out, “Are you Molly Ringwald?”

I’m sure at this point she usually gets the Breakfast Club or 16 Candles appreciation, but I was more interested in the fact that I thought I’d heard she’d written a book. So I asked her about it. It’s a collection of short stories tied together by a theme of betrayal called When it Happens to You. We talked about that briefly, and then she asked about my work and we talked about Icefall.

The whole interaction lasted maybe two minutes, but it was kind of fun to have a Hollywood moment while I was there. I thought about asking to take a picture with her, but after feeling the mood of the room, I decided I didn’t want to be that guy.

During the banquet, I was seated at a table with several of the judges for the award, as well as one of the other finalists, Gretchen Woelfle (for All the World’s a Stage: A Novel in Five Acts). Everyone was lovely, and Gretchen already wrote up a great piece on the event and what PEN Center USA is all about. It’s definitely worth a read.

When I went up to receive my award and give my acceptance speech, I talked about what an honor it was to receive the same award that had been given to Ursula K. Le Guin a few years ago. I haven’t ever blogged about Ms. Le Guin in detail, or what her work has meant to me. I think that’s something I need to remedy in the near future. I am a writer because I read her books.

It was a really wonderful evening. Thank you again to PEN Center USA for the honor, and to Scholastic (I’m looking at you Candace!) for their support in sending me. And congratulations to the other finalists!

We had our first snowfall of the year a couple of days ago, and woke up to this:

Pretty magical. I looked out the window and felt a bit like Ralphie in A Christmas Story on Christmas morning, with the harp music playing and everything. It has put me in mind of the holidays, that’s for sure.

And speaking of holidays, a good friend of mine, Kimball Fisher, has written a short story for the Christmas season. It’s titled Finding the Baby Jesus. I really enjoyed it and blurbed it. It’s available through Amazon.

6 responses to “PEN Center USA Award, and the first snowfall of the year”